Are Mortgage Interest Rates Going Up in 2015? 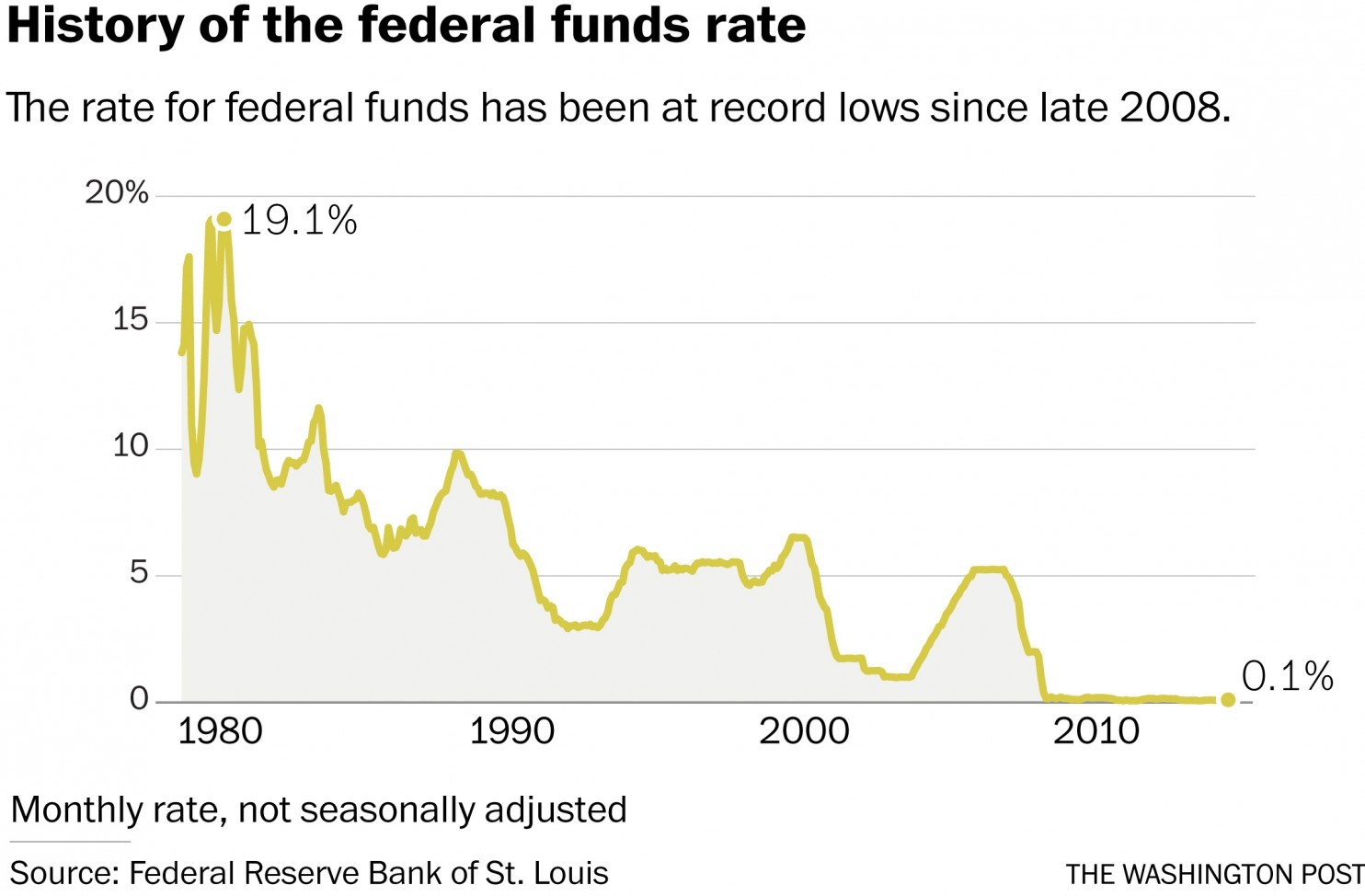 Regarding the direction of mortgage interest rates for 2015 and beyond, there are two polarized opinions.  On the popular side are many Realtors, loan officers, and economists who keep buying into the Federal Reserve’s meeting statements about raising interest rates this year.  On the other are finance professionals and savvy homebuyers who are actually betting on flat to lower interest rates.  So, why the difference in opinion and who might be right?

For the rate increase camp, let’s examine the source of their insistence on higher rates, the US Federal Reserve Bank, which ostensibly “sets” interest rates.  Here’s a nice historical chart by the Washington Post of the federal funds rate, the rate charged by the Federal Reserve Bank to member banks.  This rate sets the floor for the cost of money in the US and underlies an enormous range of bank originated loan products, including home mortgages.  So, the lower the federal funds rate, the lower the mortgage rate banks can charge and still make a very tidy profit.

As we can see by the chart, the federal funds rate had been on a long decline for 30 years before flatlining in late 2008 when the Federal Reserve hit the panic button in the midst of the Great Recession.  For better or worse, the near zero federal funds rate meant a huge flow of cash poured into the surviving banks, which were simultaneously chastened and told to lend the cash out only to borrowers who met very high underwriting standards–a tough spot to be.  As a result, banks sat on enormous balance sheets and had to compete hard for qualified borrowers with ever lower mortgage rates, which we witnessed from 2009 to today.

Such mindlessness serves no one any good, especially not the clients of these Realtors and lenders.  Yet, the irony is that it’s actually self-defeating for real estate agents and lenders to suggest higher rates are coming soon, in an attempt to stoke buyers into a deal today.  Their reasoning goes as such — in a theoretical economic model, if mortgage rates do go up, then housing affordability goes down (the reason they say you should buy now).  But, if fewer people can afford a home, demand for housing falls and prices will follow.  It’s been a generation since this happened, but it was only in the late 1970s and it was real.  Anybody who had the cash to buy then are probably looking at a 10-20x return on their home.  Today, there are other factors in play that obfuscate this relationship, but they don’t eliminate it.

A revealing look at the situation

So, if we step back from the rote repetition about the Federal Reserve statements, let’s see why rates are more likely to stay flat or actually head lower.  As is the nature of a true market, the odd bedfellows in this camp comprise the most sophisticated financial professionals on Wall Street and the average joe homebuyer.  What do they know that we should be thinking about?

For some answers, we have to go back to the fundamentals.  Market interest rates reflect demand for money in a market economy, and there hasn’t been a whole lot of demand lately.  While economic output in the United States seems to be improving with positive Gross Domestic Product growth, most people intuitively feel as if there has been little change in the past few decades.  As pointed out by the Tea Party, the Occupiers, and others, there has been a widening gulf of inequality in this country, largely being engineered by government policies and special interest objectives.

Everyone just outside of the top 5% of income has seen his relative earning power compared to the costs of goods and services decline for the past 30 years  The Federal Reserve has been participating in one of the largest peacetime wealth transfers in history.  By creating top-down monetary stimulus programs (obscurely named “quantitative easing”) to purchase US Treasuries and mortgage back securities from Freddie Mac and Fannie Mae, the Federal Reserve has pushed enormous piles of cash into banks and major institutional investment funds.  The belief was that the cash would trickle down into the economy.  However, they aren’t investing the cash as they don’t see enough opportunities to place their sudden windfall.  So, money is not flowing through the economy to generate economic activity and thus demand for money.

In a perverse way, this creates a negative feedback loop for the average American consumer, with a giant sucking sound from their modest net worth.  With few good investment opportunities, bank and institutional investors continue to pile into low yielding bonds, leading to abnormally low interest rates and spend their time and cash churning out more mortgages, which are sold back to Freddie Mac and Fannie Mae, who then sold back to the Federal Reserve until the end of the quantitative easing programs.

At the same time, companies are not investing much as they’re also trapped in the viscous cycle (except for the high flying tech companies like Apple, Google, or LinkedIn).  With the wealth transfer to the rich, the lower 95% of income earners make less money to buy the goods to needed to justify further investments.  So, most just pile their trillions of dollars in retained earnings into financial engineering like stock buybacks to drive higher share prices and dividends for the investors, who also happen to be the top 5%.

Therefore, rather than plowing money through the economy to drive growth, the Federal Reserve, banks, and major corporations are all just holding onto ever larger proportions of national wealth in their hands, now well into multiple trillions of dollars.  They play a game of musical chairs, shuffling money back and forth with the Federal Reserve printing money to pay for interest and transaction costs.  This leads to insufficient investment in both people and productivity, which has led to a declining middle and lower class.  When the vast majority of the population has less purchasing power and willingness to spend, there’s less demand for money, perpetuating the cycle.

Other countries with less dynamic economies have already withered under the weight of this vicious cycle and have had to deploy ever more unconventional monetary tools to stave off dreaded deflation.  Indeed, they’ve taken lessons from our Federal Reserve and Treasury Secretary and gone further.  The European Central Bank has mimicked us (after loudly criticizing our moves in 2009) with their own $1.2 trillion dollar quantitative easing program for 2015.  Instead of merely stimulating with easy money policies, they are actually penalizing the money hoarders they created by charging negative interest rates.

Unfortunately, such extreme measures require a robust rebound in economic productivity to unwind, which we are no where near.  So, it is now more likely that other countries will have to continue escalating their tactics with ever more risky and exotic policies, which is more likely to result in negative interest rates.  Still, unless policies change to stop this giant transfer of wealth to the already wealthy, the vicious cycle won’t stop and demand for money will continue to decline, making ever more crazy situations become reality, like zero percent mortgage rates.

So, what does this mean?

By textbook definitions, impending deflation should cause asset prices like housing to fall, especially if zero percent interest rates aren’t sufficient to generate inflation.  But, the relationship is more complex.  As institutional investors fail to find better investment opportunities, having already driven up the global stock markets to record highs, hard assets like real estate become more attractive.  They’re now sweeping up all the top property assets around the world, paying ever more eye-popping prices as they convert their cash windfall into tangible assets.  For example, the landmark Waldorf Astoria in New York City just sold for a record $1.95 billion to a Chinese insurance company, who apparently had nowhere better to place their cash.  After holding on to this iconic property for almost 65 years, Hilton Hotels decided that was a deal they couldn’t refuse.  Of course, Hilton immediately redeployed the cash into other assets to avoid income taxes.

On a more practical note, this situation also means the average consumer should also be doing the same with their earnings and convert their cash into hard assets like housing.  Otherwise, the investment activities of the wealthy and other concentrated wealth will price properties out of reach of average consumers, just like in China.

Yet, as with any financial advice or recommendation, there is an expiration date and one that is being actively monitored at Archers Homes.  The market is constantly moving and consumers who can act with the same market insights as hedge fund managers will see similar benefits.  For now, we see mortgage interest rates remain steady if not lower for the remainder of 2015.  Taking the simplified economic relationship described above, this situation implies that housing prices should continue going up as affordability increases.

Of course, there are many other factors at play, including stricter underwriting standards, inflows of foreign capital, increases in employment and household income, shift in weather patterns, etc., that also impact housing prices.  But those need to be analyzed on a case-by-case basis and will be further discussed in future postings.